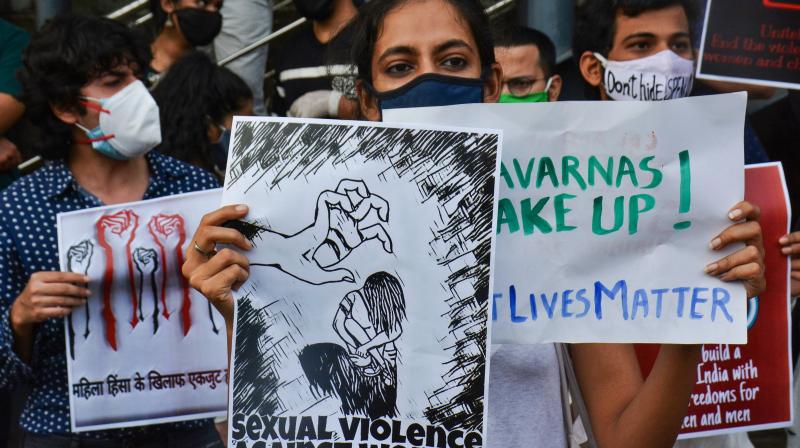 Mumbai: Democratic Youth Federation of India (DYFI) members during a protest rally demanding justice for the Hathras victim, outside the gate of IIT Powai, in Mumbai, Friday. (PTI)

Lucknow: Uttar Pradesh Chief Minister Yogi Adityanath on Friday gave directions to suspend SP, DSP, Inspector and some others officials based on the first report of SIT which is probing the torture and alleged gangrape case of a 19-year woman in Hathras who later succumbed to her injuries in a Delhi hospital.

According to the Chief Minister’s office, narco polygraph tests will also be conducted of SP, DSP and other concerned officials. The Chief Minister had said earlier in the day that the government was committed to ensuring the safety of women. The UP government had formed an SIT to probe the incident and said that the matter will be heard in the fast track court.

“Those who even think of damaging the honour of our mothers and sisters will be destroyed completely. They will be given such punishment that it will serve as an example in future. Your UP government is committed to the safety and security of every mother and sister. This is our promise, our determination,” Adityanath said in a tweet in Hindi.

The 19-year-old woman died at Delhi’s Safdarjung hospital on September 29. All the four accused in the incident have been arrested. An uproar has erupted over the incident with the opposition also raising questions over the manner in which the last rites of the woman were performed. The Police has said that consent of family was taken for cremation.