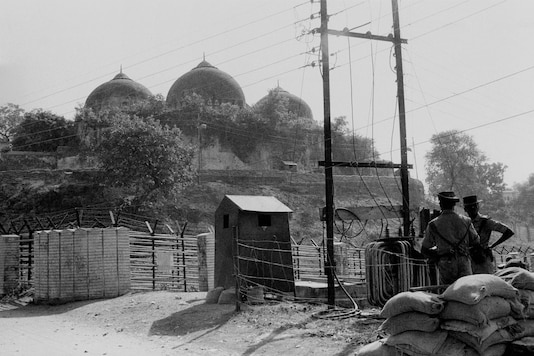 File photo of the Babri Masjid in Ayodhya in November 1990. (PTI)

All the 32 accused in the Babri mosque demolition case, including BJP veterans L K Advani and M M Joshi, were acquitted by a special CBI court in Lucknow which said there was no conclusive proof against them.

The Muslim community in Ayodhya on Wednesday appeared to accept the CBI court verdict in the 1992 Babri Masjid demolition conspiracy case in “interest of peace” in society, hoping that Mathura and Kashi issues will not be raked up after it. Some of them, however, hoped that the CBI will go in appeal against the CBI court ruling to “complete the due process of law”.

All the 32 accused in the Babri mosque demolition case, including BJP veterans L K Advani and M M Joshi, were acquitted by a special CBI court in Lucknow which said there was no conclusive proof against them. “As we have accepted the Supreme Court’s November 9 verdict, we will accept this verdict too. It is the final closure of the Ayodhya episode. The peace must prevail,” Iqbal Ansari, the main litigant in the Ayodhya land dispute case in the apex court, told PTI.


He also opined against challenging the CBI court ruling. “When in 28 years, those accused of the Babri Masjid demolition could not be punished, what is the benefit of punishing them when half of them have died and remaining ones are at the last stage of their lives?” asked Ansari.

Ayodhya Nagar Nigam corporator Haji Asad hoped that Kashi and Mathura issues will not be raked up after the CBI court ruling. “We were expecting the kind of judgement given today. People had been discussing it for over two months. I, however, fear that we may face movements for Kashi and Mathura soon,” he said, referring to the mosques in these two places.

The secretary of Indo-Islamic Cultural Foundation, the Ayodhya Mosque Trust, Athar Hussain, however, hoped that the CBI would go in an appeal against the court ruling. “The Supreme Court’s constitution bench in its November 9 judgement has said the demolition of the Babri Mosque was a violation of the law and it gave 2.77 acres land for the temple and five acres for the masjid. We abide by that justice,” he said.

“Now that the CBI court has delivered its judgement acquitting the accused of the conspiracy in the Babri demolition case, we, as law-abiding citizens of the country, will abide by this verdict as well,” he added. “Hopefully, the prosecution side will appeal against the CBI court judgement in higher courts to complete the due process of law,” he said.

Yet another former litigant in the Babri Masjid case, Mohammad Umar, said, “Now the judgement has been delivered by the court. As law-abiding citizens, we accepted it, but now the law must ensure that the rule of law must prevail in India and peace should be maintained.” 1 hour ago
Another Setback For CSK, Dwayne Bravo Out of IPL 2020