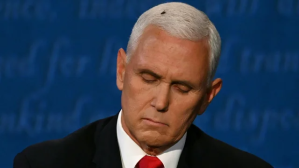 Besides moderator Susan Page losing control early and that fly on Mike Pence’s head, if there is anything everyone can agree on about tonight’s first and only vice presidential debate of the 2020 campaign, it is that the 2024 campaign has begun.

Between Sen. Kamala Harris and incumbent Mike Pence, one or both of them may very well be in the race for the White House in four years, regardless if Donald Trump or Joe Biden wins next month.

As for 2020, well, besides all the attention that the black fly on Pence’s white hair attracted online, tonight was another wasted opportunity of talking points and over talk in front of a nation that has seen over 210,000 Americans die from the coronavirus, a hobbled economy and partisan chaos in Washington, D.C.

Overall, the 90-minute showdown in Salt Lake City between the would-be VP and the pendulous current VP, who had an apparent eye ailment, was a cooler contrast to the chaotic presidential debate last week. Yet, in a supposedly near sterilized environment that the fly slipped into, if the approach was different from the first POTUS debate, the intent was not.

In what will likely be one of the most watched VP debates since they were started 1976, Pence rarely held to his allocated time, ignored the other rules and avoided answering most of the questions from USA Today DC Bureau chief Page. Several times, as Pence interrupted her, Harris said to him, “Mr. Vice President, I am still speaking.”

Once again, with Pence looking directly into the camera a bit more than Harris, it often descended into non-sequitur bullet points and impotent instances of sticking to the agenda the two sides had negotiated via the Commission on Presidential Debates. “A mute button might work to stem interruptions and breaching time limits. So would a moderator with a bull horn,” CBS News’ Mark Knoller wrote on Twitter.

Honestly, a suggestion that once seemed almost entirely unnecessary and anti-democratic just over week ago, now looks essential.

Whether there is a second or third POTUS debate on October 15 and October 22, this latest debate debacle again shows that the commission needs to exert greater muscle to enforce the rules. Moderators need to step in not just to enforce the agreed upon rules, but to try to nail down the candidates when they dodge questions. That was particularly true when Pence never answered a question as to why the White House flouted mask-wearing guidelines, and later on whether he would commit to a peaceful transfer of power. Harris, too, did not answer at certain points, such as whether she and Joe Biden would support adding members to the Supreme Court.

What was unclear was why the debate, given the coronavirus outbreak at the White House, was not done virtually, as questions linger as to Pence’s exposure even though he has tested negative.

Separated by two sheets of plexiglass and seated over 12-feet apart in a deal struck by both sides in recent days after Trump, the First Lady, and a number of the White House upper echelon tested positive for COVID-19, Harris and Pence could barely contain their contempt for each other and their respective bosses.

At certain points, the candidates appeared to be talking as if they were from two separate planets – which tells you almost everything about American politics today. In their first exchanges, Harris claimed that Trump called the virus a “hoax,” and Pence claimed that Biden called the president’s travel restrictions on China “xenophobic.” Both are distortions.

Like so many members of the current administration, a fawning Pence was obviously playing more to an audience of one watching in the White House than the voters at home.

After noting it was an “honor” to be onstage with the first woman of color on a national ticket, a much chattier than usual Pence tried to smear the Democrats as ripping off the Trump COVID-19 plan. In a move that reeked of being way too inside the Beltway, the former Congressman and Indiana Governor added, “plagiarism is something Joe Biden knows a little bit about.” That was a reference to a scandal that plagued Biden’s first presidential campaign and forced him to drop out of the race in 1987.

For the most part, past prosecutor and California Attorney General Harris sat there and let former Gridiron Club president Page attempt to rein in Pence with one “thank you Vice-President Pence” after another.

“The American people have witnessed what is the greatest failure of any Presidential administration in the history of our country,” Harris said early on about the Trump/Pence response to the still surging coronavirus pandemic. “They knew and they covered it up,” she added citing admissions unveiled in Bob Woodward’s latest book Rage.

Much more conservative than her performance in the primaries, Harris indicted Trump over his alleged slagging of soldiers and veterans and near silence on reports of Vladimir Putin and Russia offering lucrative bounties in Afghanistan on American troops. Pence spent little time on it.

Before Harris and Pence took the stage at the University of Utah on Wednesday, CNN’s Jake Tapper called this “the most important vice presidential debate in history.” That may indeed be the case, with two septuagenarians fighting for the Oval Office this year. Harris and Pence are in the unique position of owning the table in their respective parties and the future of the country.

Yet, they missed the importance of that moment tonight, instead keeping the spotlight on the top of their tickets. Unlike that fly.

59 mins ago
France: Killed teacher’s pupils handed over to judge amid probe | France

59 mins ago
France: Killed teacher’s pupils handed over to judge amid probe | France