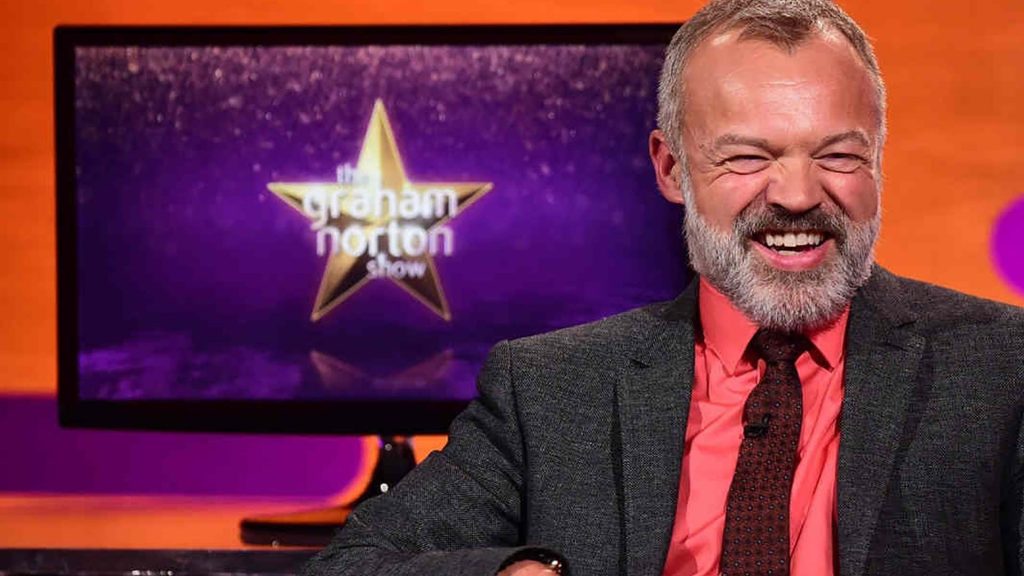 Hello International Insider friends, and happy Friday. Jake Kanter here with some Deadline must-reads in the week that U.S. President Donald Trump tested positive for coronavirus. If you want to subscribe to get this alert in a timely fashion, sign up here.

Graham Norton Back Under Bright Lights

Back at it: Hollywood’s favorite British talk show returned to the studio on Thursday night, with Graham Norton proclaiming that’s he’s never been so excited to walk back on-set after presenting his show from home for weeks.

What’s different: Executive producer Graham Stuart tells me that The Graham Norton Show’s famous red sofa has been ditched for now. The chat will also be a “blended” affair, with some stars in the studio and others dialing in on Zoom.

The showman gets his audience: 100 fans were allowed into the studio for Thursday’s recording. Stuart says it’s enough for Norton to feel at home. “The lockdown was a technical test, but also a professional test for Graham without an audience. He did a phenomenal job, but now he will be closer to his natural home, which is performing in front of people,” he says.

But things could change: With coronavirus getting back to its rampant worst again in the UK, the government could yet introduce another lockdown. That will mean no more studio audiences. “I’m sure we will be facing many challenges over the next 25 weeks,” Stuart admits. Full interview.

A MARV-elous new job: Lionsgate Europe’s former CEO Zygi Kamasa is back in the game. He’s been hired to run Matthew Vaughn’s MARV, the producer behind Kingsman and Kick-Ass. Kamasa hinted that he had another venture lined up when he left Lionsgate in July, so it seems he and Vaughn have been talking for some time.

What he’ll bring: Kamasa will take care of MARV’s commercial operations, freeing Vaughn up to focus on filmmaking. Kamasa told my colleague Andreas Wiseman that the ambition is to “go from 1-2 movies a year to multiple movies and returning TV series.”

First up: Vaughn is in post-production on two British indie films: Silent Night and action-comedy School Fight (think The Inbetweeners with stunt-men, says Kamasa). In addition, MARV is fully financing Tetris with Taron Egerton and is working on prequel The King’s Man. Full interview.

Skipping the cinema: STX’s Gerard Butler thriller Greenland is the latest studio movie to forego theatrical in favor of an online launch as the pandemic continues to cause havoc for exhibitors. HBO Max has struck a big pay-TV and streaming deal – in the $20-30M range – for the movie in the U.S. while Amazon has snapped it up for the UK, Australia, and Canada.

Why it matters: These were big deals, which speak to the intense competition in the digital market right now as well as the ongoing challenges for the theatrical space. Greenland will still get theatrical rollout in a number of overseas markets, however. Andreas had the scoop.

Streetfighter: We got the first good look at new BBC director general Tim Davie on Tuesday, when he faced down MPs of British Parliament’s Digital, Culture, Media and Sport Committee. These are usually tricky encounters for BBC bosses, with the broadcaster’s weak spots prodded vigorously by grandstanding politicians. But Davie came out swinging and clearly relished the brawl with some of the BBC’s biggest critics.

A telling moment: Philip Davies, a Tory MP and avowed enemy of the BBC, got into fizz about the broadcaster’s “out of touch” liberal, London-centric, metropolitan newsroom. “As a proud Croydon boy, I don’t think I’ve ever been so insulted,” Davie joked, before pointedly observing: “I look with a wry smile at the number of BBC staff who have gone on to work for your good party.”

The big takeaways: Away from the bickering, we got some moments of substance from Davie, the former CEO of BBC Studios. He pledged to strip stars of their Twitter accounts if they break new social media rules on impartiality. Davie hinted at plans to make iPlayer just as powerful as TV channels when it comes to commissioning originals. He also bristled at government proposals to decriminalize non-payment of the licence fee, which he said “doesn’t pass the logic test.”

Sidenote: BBC chairman David Clementi was alongside Davie (virtually, natch) and he turned his fire on reports that the government is set to install ferocious BBC critic and licence fee evader Charles Moore as his successor. “Impartiality starts at the top of the organization, it doesn’t start halfway down,” he said. Full quote here.

🌶️ Hot one of the week: You won’t have to wait long for the Borat sequel after Amazon secured Sacha Baron Cohen’s film and will premiere it right before the U.S. election. Mike Fleming had the scoop.

🖊️ Applications open: The UK has opened applications for its Production Restart Scheme, which will plug the coronavirus insurance gap for shoots. Apply here.

🚚 On the move: Just weeks after stepping down as Fremantle’s global drama chief, Sarah Doole has been named as the new CEO of Studiocanal-owned Red Production Company. Go deeper.

🍿 International box office: As key areas of the U.S. remain closed, offshore is powering Tenet at 86% of the global gross. Its worldwide take now stands at $284.9M. Nancy Tartaglione has the numbers.

📽️ Curtains up: Cinemas in India will get a reprieve beginning October 15 when they are allowed to open outside containment zones. Click for Nancy’s story.

📅 Diary date: Mipcom may not formally get going until later this month but the virtual platform that will replace the Cannes market, Mipcom Online+, opens its doors on Monday, October 5.

📺 One to watch: David Attenborough: A Life On Our Planet premieres on Netflix on October 4. The 93-year-old naturalist calls the feature documentary his “witness statement” on human destruction. Here’s the trailer.

Whodunit: BritBox is extremely tight-lipped about its subscription base, but bosses did let slip one fun statistic this week during a virtual lunch with the Broadcasting Press Guild. The ITV/BBC streamer released 613 classic Doctor Who episodes on December 26 last year, and one Whovian really stepped up to the challenge, bingeing the entire lot by Valentine’s Day 2020. That’s around 12 episodes a day. “Whether he was on his own or not on Valentine’s Day as a result [we don’t know],” Reemah Sakaan, ITV’s director of SVOD, noted wryly.

Zeta likely a hurricane before hitting Yucatan, heading for US | Mexico

Zeta likely a hurricane before hitting Yucatan, heading for US | Mexico

1 hour ago
Discord could be the next esports ecosystem