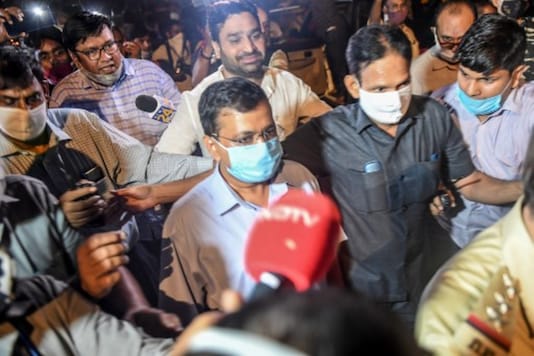 Addressing the hundreds of protesters at Jantar Mantar, Kejriwal said there should no politics on the incident.

Delhi Chief Minister Arvind Kejriwal on Friday joined a massive protest at Jantar Mantar against the alleged gang-rape and assault of a 19-year-old Dalit woman in Hathras district of Uttar Pradesh. Addressing protesters, he said there should no politics over the incident.

“There should be no politics on this issue. Why should such an incident happen in UP, Madhya Pradesh, Rajasthan, Mumbai or Delhi? No rape incidents should happen in the country,” said Kejriwal.


“The entire country wants that the culprits be given stringent punishment. Some people feel that attempts are being made to save them. At this time, the victim’s family needs all the possible help,” he added.

The woman succumbed to severe injuries she suffered when she was allegedly gang-raped and assaulted by four upper-caste men in the fields at her village in Hathras on September 14. The accused have now been arrested.

The woman was cremated in Hathras in the dead of the night, with her family members saying they were not allowed to bring the body home one last time. However, the police claimed they had the family’s consent for the cremation.

Hundreds of people gathered at Jantar Mantar on Friday evening to protest against the barbaric gang-rape and murder, calling upon Yogi Adityanath to resign as UP chief minister. The ruling Aam Aadmi Party (AAP) and Bhim Army had earlier given the protest call, asking people to congregate.

The protest was also attended by Bhim Army chief Chandrashekhar Azad, CPM General Secretary Sitaram Yechury and CPI leader D Raja. “The UP government has no right to stay in power. Our demand is that justice should be served,” said Yechury.

“I will visit Hathras,” said Azad at Jantar Mantar. “Our struggle will continue till the time the UP CM doesn’t resign and justice is served. I urge the Supreme Court to take cognizance of the incident.”

17 mins ago
Discord could be the next esports ecosystem

32 mins ago
What’s Pujor Prem Like? Couples Who Dated Before COVID Open Up

17 mins ago
Discord could be the next esports ecosystem

32 mins ago
What’s Pujor Prem Like? Couples Who Dated Before COVID Open Up